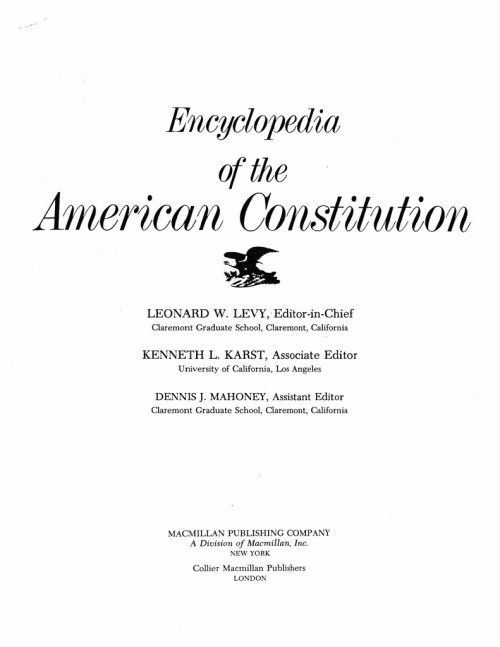 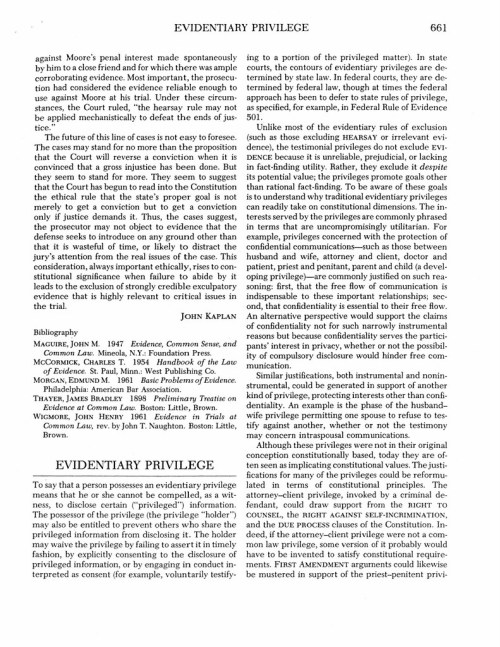 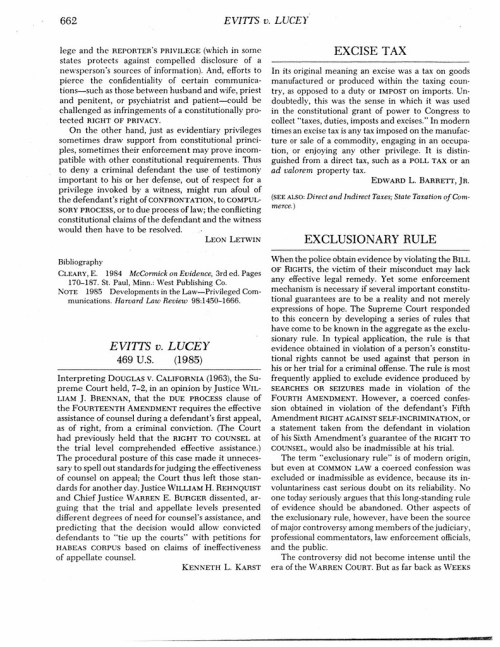 Encyclopedia of the American Constitution

To say that a person possesses an evidentiary privilege means that he or she cannot be compelled, as a witness, to disclose certain (“privileged”) information. The posses­sor of the privilege (the privilege “holder”) may also be entitled to prevent others who share the privileged infor­mation from disclosing it. The holder may waive the privilege by failing to assert it in timely fashion, by explicitly consenting to the disclosure of privileged information, or by engaging in conduct interpreted as consent (for example, voluntarily testifying to a portion of the privileged matter). In state courts, the contours of evidentiary privileges are determined by state law. In federal courts, they are determined by federal law, though at times the federal approach has been to defer to state rules of privilege, as specified, for example, in Federal Rule of Evidence 501.

Unlike most of the evidentiary rules of exclusion (such as those excluding HEARSAY or irrelevant evidence), the tes­timonial privileges do not exclude EVIDENCE because it is unreliable, prejudicial, or lacking in fact-finding utility. Rather, they exclude it despite its potential value; the privi­leges promote goals other than rational fact-finding. To be aware of these goals is to understand why traditional evi­dentiary privileges can readily take on constitutional di­mensions. The interests served by the privileges are commonly phrased in terms that are uncompromisingly utilitarian. For example, privileges concerned with the protection of confidential communications—such as those between husband and wife, attorney and client, doctor and patient, priest and penitant, parent and child (a developing privilege)—are commonly justified on such reasoning: first, that the free flow of communication is indispensable to these important relationships; second, that confidenti­ality is essential to their free flow. An alternative perspec­tive would support the claims of confidentiality not for such narrowly instrumental reasons but because confiden­tiality serves the participants’ interest in privacy, whether or not the possibility of compulsory disclosure would hinder free communication.

Similar justifications, both instrumental and noninstrumental, could be generated in support of another kind of privilege, protecting interests other than confidentiality. An example is the phase of the husband-wife privilege per­mitting one spouse to refuse to testify against another, whether or not the testimony may concern intraspousal communications.

Although these privileges were not in their original con­ception constitutionally based, today they are often seen as implicating constitutional values. The justifications for many of the privileges could be reformulated in terms of constitutional principles. The attorney-client privilege, invoked by a criminal defendant, could draw support from the RIGHT TO COUNSEL, the RIGHT AGAINST SELF-INCRIMINATION, and the DUE PROCESS clauses of the Constitution. In­deed, if the attorney-client privilege were not a common law privilege, some version of it probably would have to be invented to satisfy constitutional requirements. FIRST AMENDMENT arguments could likewise be mustered in sup­port of the priest-penitent privilege and the REPORTER’S PRIVILEGE (which in some states protects against com­pelled disclosure of a newsperson’s sources of informa­tion). And, efforts to pierce the confidentiality of certain communications—such as those between husband and wife, priest and penitent, or psychiatrist and patient—could be challenged as infringements of a constitutionally protected RIGHT OF PRIVACY.

On the other hand, just as evidentiary privileges some­times draw support from constitutional principles, some­times their enforcement may prove incompatible with other constitutional requirements. Thus to deny a criminal defendant the use of testimony important to his or her defense, out of respect for a privilege invoked by a witness, might run afoul of the defendant’s right of CONFRONTATION, to COMPULSORY PROCESS, or to due process of law; the con­flicting constitutional claims of the defendant and the wit­ness would then have to be resolved.

This entry was posted in Uncategorized. Bookmark the permalink.